Is this sexier than a six pack? I’ll share what men thought when I polled them

Have you ever felt as though there is a portion of fat on your stomach that you are certain just cannot be removed? You’ve tried and tried and either hit a plateau or never felt any real changes at all?

If so, you’re not alone. i have heard many wishes be thrown my way and none with as much conviction as the one of losing the fat at the base of your belly.

What Men Think Of Your Abs

Before I show you the two pieces of the puzzle to truly flatten your stomach, I wanted to share something with you. It was a speech I have repeated to hundreds of women and continue to use it when the time is right.

It goes something like this (Okay – pretend you’re standing a few feet from me as I talk).

“If you walked by a man, or a woman as they admire your body, have you ever heard the words uttered “hey nice stomach”, or “wow…her abs are hot”. (Here’s where all women shook their head with a no response).

Do you think a man who finds you captivating goes home and when he is excited to tell his friend what he saw, the first thing he says to them is “Oh man….you should have seen her stomach!”

That’s because no one has as much focus on someone’s abs as much as the person who owns them. The attention grabbers on your body are your bum, your legs, your back and of course your face (and smile). The last thing a man admires is your stomach – if it even gets his attention at all.

Now tell me, have you ever seen a man step to the side of you, squat down as he gazes at your belly and bellows out a breathtaking “WOW – That’s hot!”.

I don’t want to bore you with the rest of it, but the point I was trying to make was to focus on being fit and happy with of course a body you are proud of. Don’t battle the mental anguish of trying to shoot for a flat stomach with no fat every day of the year. Rather peak to show them off at events where you know you would like to be your leanest.

Examples for most, including myself and my clients would be a vacation, summer and the beginning of January after having enjoyed delicious home cooked food over the holidays. It may as a surprise but athletes use this exact approach. Only they peak for competitions and other sports events. The lead happy lives in their minds and still look great and feel great even when not in ‘peak” form.

Below are two photographs I selected. I polled 24 men (I know, not a lot), and the questions asked was “When holding someone close and watching how they move around you, which of these two bodies is sexier to you?”

Picture A – There is fat on her stomach as there is supposed to be. But she wears it perfectly.

Picture B – Does this look sexy to you? Lean yes, but sexy?

Why So Many Fail To Get A Nice Looking Stomach

I’m going to show you in a moment, a simple exercise that will blow you away. It’s not one of my best one’s but it is vicious (in a good way) to really hit every angle and every muscle in your midsection.

But to fully appreciate it, you’ll first want to learn what not to do. Or to put it differently, why so many become dejected and give up because what is on the market, just isn’t working.

The 3 DO NOT’s To get a Flat Stomach

Don’t do more than 12 reps – Somewhere in between is best, or even mix it up, but anything beyond 12 is endurance and the muscle probably won’t fully change they way you want.

Don’t move your back – If you move your back you’re really “shutting” off the abs and even though you’re doing an ab exercise, your abs are not really doing much. And even worse, your back pays dearly.

Don’t do the same exercises you see everywhere – Popular exercises are planks, sit-ups, and crunches, but they are by no means the best. There are plenty more that can rip your abs in less than half the time!

Okay, now that we’ve covered that, let me show you an exercise you can use to blast through any plateaus an take you to the next level.

I made a video for you so you can learn it perfectly. Enjoy!

Just a heads up, the sound is not the best, but I did buy a new mic for future videos

One Last Thing Nutrition play a large role in seeing your abs, but developing your abs – Sculpting, shaping and moulding them lies in the exercise you choose and how you perform them. I hope this helps jump start your new Ab slimming project and if you have any questions you wish to ask, feel free to do so below, and I’ll be happy to assist you in any way I can. 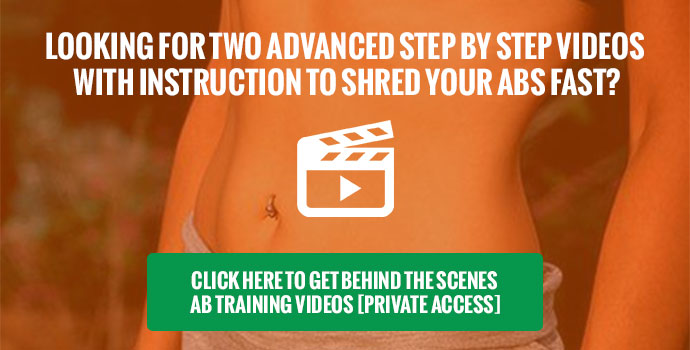 And be careful not to abuse your abs. if they shorten and don’t stay flexible, it will be even harder to tone and firm them. So be sure to stretch them nicely after each session.